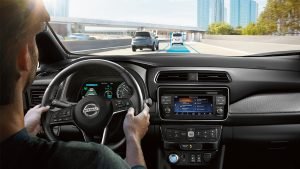 The 2019 Nissan Leaf has finally arrived! After many years on the sidelines as a “cute” but not so useful electric Vehicle, Nissan has finally upped its game and brought the Nissan Leaf EV into the realm of the Useful EV Owner.

In fact the Nissan Leaf Plus is reported to be able to travel an incredible 226 Miles on a single charge compared to the dismal rating of some of its predecessors.

Every Angle of the 2019 Nissan Leaf Plus

Nissan has fulfilled its promise to introduce a long-range version of the Leaf electric car: the 2019 Leaf Plus will go on sale this spring with a larger battery pack and a more powerful electric motor.

Nissan unveiled Tuesday a new version of the 2019 Leaf electric car, called the Leaf Plus or Leaf e+, that can go well over 200 miles on a charge. Although such a model has been a long time coming, the 2019 Nissan Leaf Plus stands as strong evidence that in the eight years since the first deliveries of the Leaf, Nissan has listened carefully to what…

Nissan used the 2019 CES event as the platform to launch its new long-range version of the Leaf electric car, which is called the Leaf Plus here and Leaf “e+” in other markets. The Plus gets a new, 62-kWh battery pack that increases range to an EPA-rated 226 miles, 75 more than the current non-Plus car.